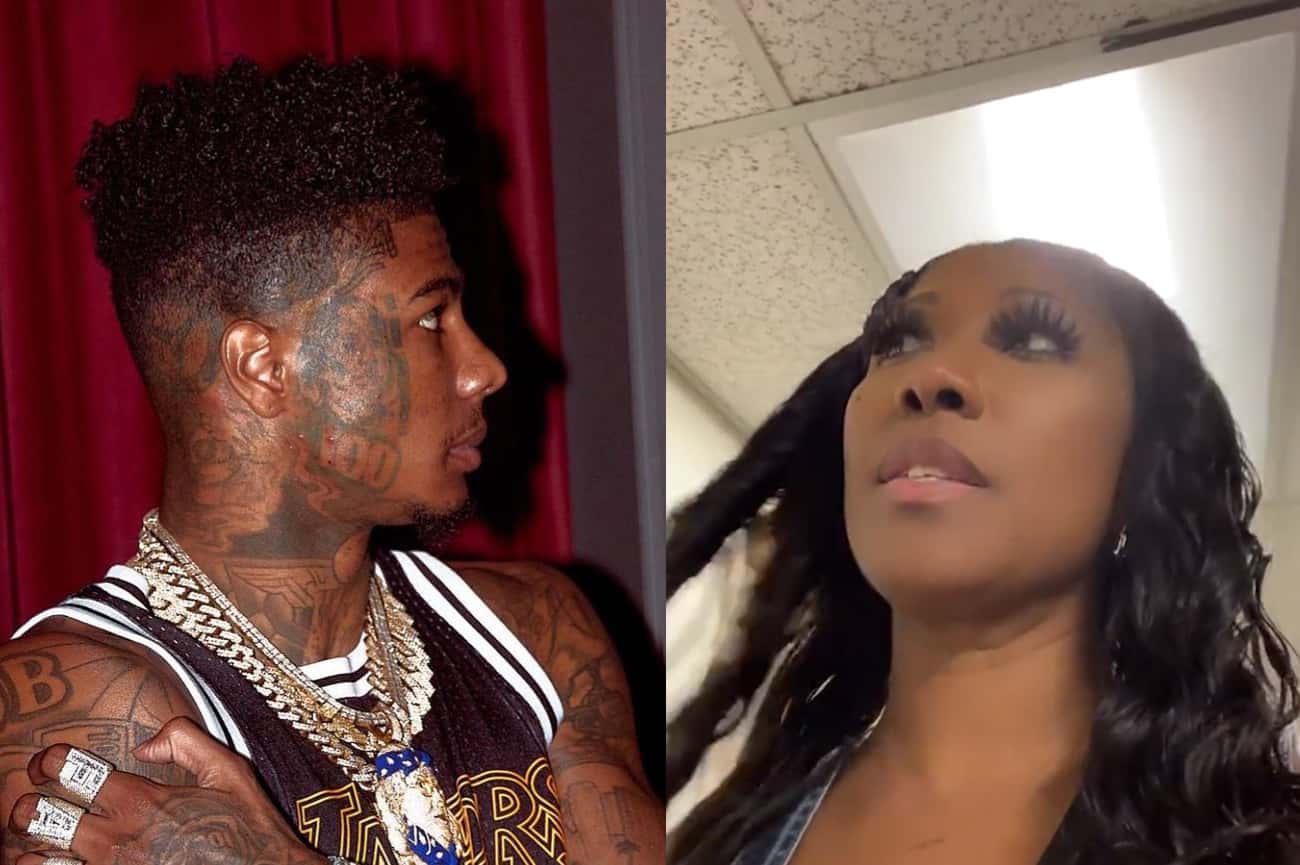 It’s been a rough week for rapper Blueface, who’s had to deal with his mother, Klarissa Saffold, publicly stating that she thinks he’s prostituting his girlfriend Chrisean Rock.

“Dam the whole family prostituting this poor girl. Now I feel bad for real. Y’all sent this girl back here knowing she’s in harm’s way! I bet there is nothing about the next episode from none of y’all. Because y’all sent y’all most pride possession back after seeing her get socked out. That girl is old enough to know that’s not love. Bobby didn’t love Whitney either. They see a couple of dollars and think that’s love.”

Blueface mother continued saying that she was “the attention” and that they should be grateful for her. Saffold also mentioned that she would fight for what she want until “the bougie man or woman is gone.”

“I said what I said. I am the attention. Be grateful. Get tired all you want but I fight for mine until the bougie man or woman is gone. I’ll be right every single day about mine! You better ask them about me. I give less than a dam about his fans or the comments. So keep the algorithm coming.”

In response to his mother’s allegations, Blueface responded with a post saying that he doesn’t even know the woman he once called “mom.” He also said that she wasn’t allowed to see her grandchildren because of how much time she spent on social media.

Blueface posted: “None my mom say is true. I don’t even know that lady anymore. I lost her to the internet she just want to be known to get her hair done for free. She ain’t even aloud to see her grandkids cuz she lost herself to instagram an nobody want to be ina mix with her.”

In response to her son’s post Saffold replied: “Son you lost your mom the day you let that woman disrespect me and then kick me in my head while you videotaped it. You lost everything that day you just haven’t accepted it yet. You’re done. You had one job and that was to open the gate for those of us who earned it. You couldn’t even do that. You were never the one! You were only the gatekeeper. I’ll take it from here.”

This isn’t the first time that Saffold has talked about her son’s relationship with Chrisean. In fact, this is only one of many times that she has posted about it online.

Saffold has also been vocal about how Blueface refuses to take responsibility for his family and instead chooses to focus on himself—despite the fact that she and the family have always been there for him, even before his fame.

In the following 5 minutes video, Blueface’s mother expressed herself saying: “I’m here to ask mister Blueface if he lost me to the internet. What’s the excuse about your dad? Where’s your dad at? When was the last time you checked on your grandparents? If it’s about my hair getting done and that’s all you have to complain about after all I’ve done for you and worked in that restaurant. Shame shame on you.”

Saffold continued saying: “You let this woman get on there and claim to be kicking your child out of your house? Have I ever put a man before any of y’all…ever? Would I ever allow this type of behavior? I’m not allowed to see my grandkids?

“You not allowed to take them nowhere son. You have to have supervised visits with their mother because of the type of person you running around here with”: she continued.

“I want you to take a deep look on this internet tonight at yourself and all those people that I just named and ask yourself did you lose them to the internet too?”

“Now I’m gonna continue to pray for you and continue to try to love you but you are not making it easy.”

Blueface’s girlfriend, Chrisean, has responded to the rapper’s mother while being drunk.

In the video, Chrisean responded: “I was going to stay out of this but I just really need to make this clear because I think you’re like delusional: “she said.

“You’re not really family to him and the only reason why you left after you got beat up was because I wasn’t going anyway. Why are you doing this? It’s gonna be really sad when you can’t ever get your son back”: she said.

“If you really love him you would have pulled up and talked to him like a real woman. Instead of that Instagram stuff, exploiting his business. Lying to his name makes it worse for him. It is like you don’t care shorty.” After delaying his album multiple times, rapper The Game is finally dropping his forthcoming LP Drillmatic: Heart vs. Mind. The Los Angeles native shared the tracklist on his Instagram page, and it's a doozy: 30 tracks in all, but features have yet to be unveiled. The Game promises an album without skips—he wrote: "DRILLMATIC the REAL ALBUM OF THE YEAR". With 30 songs total, this project`produced by Hit-Boy will be […]