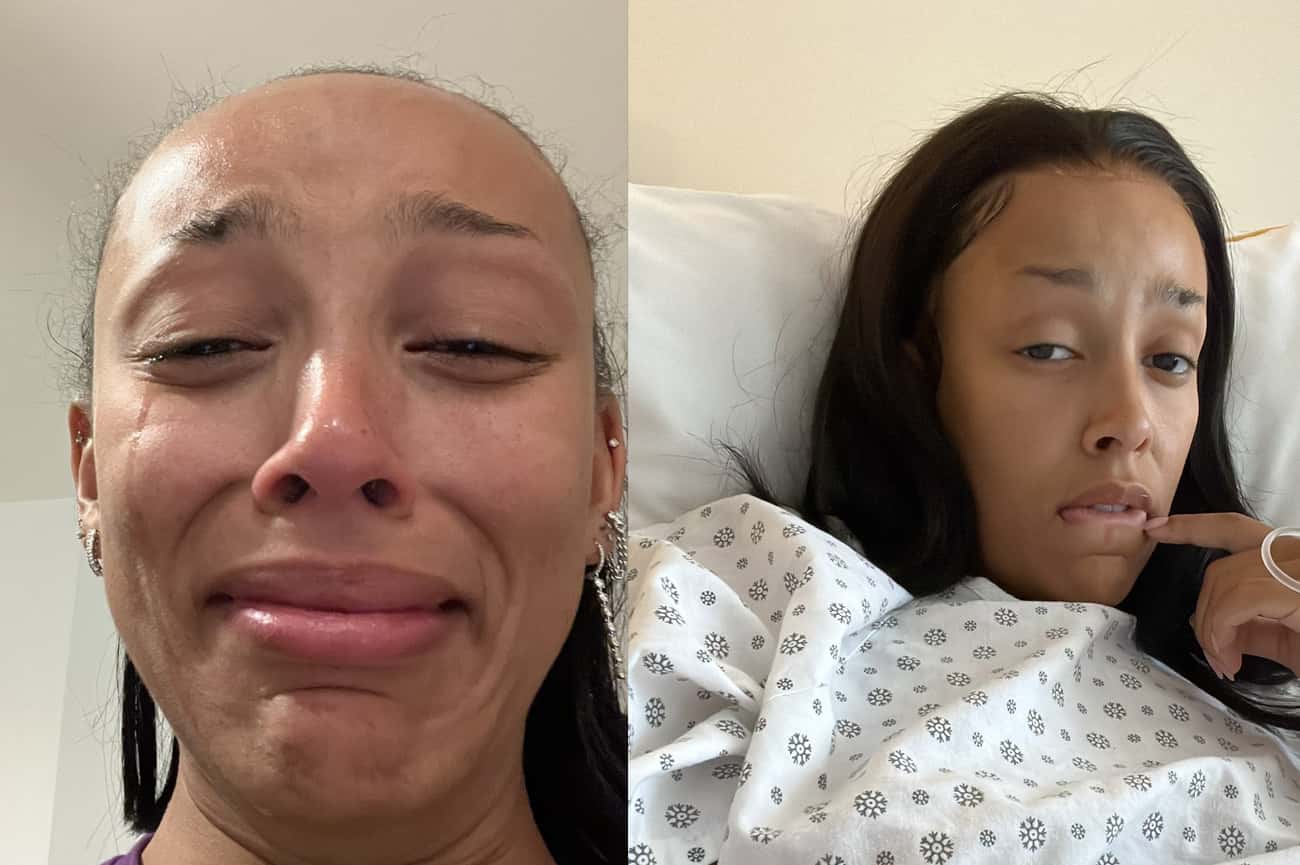 While Lying In A Hospital Bed, Doja Cat Struggles To Rap A Nicki Minaj Verse

Right before the Billboard Music Awards on May 15, Doja Cat contracted a throat infection.

A few days after winning three awards during the Billboard Music ceremony, Doja took to Twitter and shared the following message: “dr. just had to cut into my left tonsil. I had an abscess in it. my whole throat is f***ed so I might have some bad news for yall coming soon.”

Shortly after she tweeted: “Nah so my tonsils got infected before bbmas and I was taking f**ng antibiotics but forgot that I was taking them and then I drank wine and was vaping all day long and then I started getting a nasty ass growth on my tonsil so they had to do surgery on it today.”

Then she shared the bad news with her fans with the following message: ” Hi guys. I wanted you to hear it from me first. Unfortunately, I have to have surgery on my tonsils asap. The surgery is routine but the recovery is going to take a while due to swelling. That means I have to cancel my festivals run this summer as well as The Weeknd tour. I feel horrible about this but can’t wait for this to heal and get back to making music and create an experience for y’all.”

Fans and Doja followers expressed concern over Doja’s mental health on social media, especially when the pop diva released a video of herself crying over a cartoon.

A fanatic Doja fan replied to her tweet: “My Queen, I hate it when your sad and I can’t stand watch you cry. Pls My Love stop crying. Whatever it is, I want you to know we’re in it together. Pls babe, stop cry i don’t want anything to happen to you and i don’t want to lose you. I’m crying now

When a fan asked whether she was okay, Doja replied flatly, “NO.”

Doja was obviously not feeling well since she went back to the hospital a few days later for a second throat procedure, which explains why she was so depressed.

Recently the Grammy-winning star went to her second throat surgery and she shared a series of images on social media while resting in a hospital bed on Thursday, June 16.

Doja then posted a video of herself attempting to rap. Despite the fact that her voice is still recovering, Doja put in a good effort to rap a Nicki Minaj verse.

Fans were quick to respond to the video after she uploaded it on social media.

A fan with good intentions commented: “singing after surgery ur just so real!”

This statement did not sit well with the pop diva, who responded harshly with the following: “Why y’all always call rapping “singing.” I can’t take it anymore.

The internet reacted with mixed emotions, with some people delighted that Doja Cat was healing well from her surgery and others irritated that she was trying to establish herself as a rapper again. Kodak Black Called 22Gz On FaceTime To Congratulate Him On His Bond Release 22 Gz was arrested last week Sunday at JFK airport in New York City on a murder charge. He's been in jail since then, but on Thursday, June 16 he was released on bond. The Brooklyn drill star was arrested on accusations of attempted second-degree murder. The murder charge stems from an incident that occurred at a […]