Tory Lanez’s Future On The Line As Trial Continues 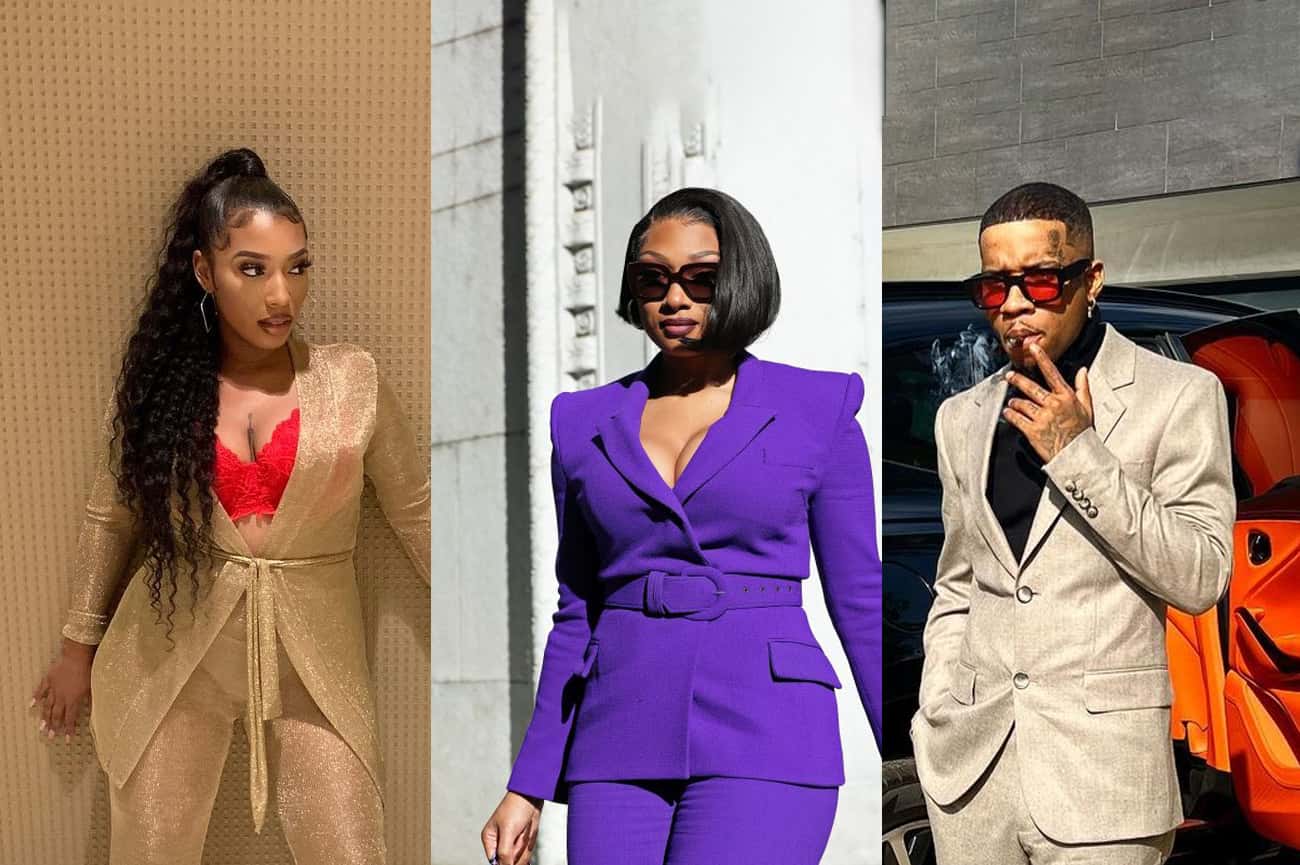 LOS ANGELES – On December 13, rapper Megan Thee Stallion took the stand in the trial of Tory Lanez, who is accused of shooting her in the foot outside a Hollywood Hills mansion on July 12, 2020.

On Tuesday, the second day of the trial, Megan arrived at the courthouse where she was greeted by fans holding signs and posters that read “WE STAND WITH MEGAN”.

As Megan arrived at the courthouse to testify against Lanez, a man yelled out, “Megan, why did you lie on that boy?”

On Tuesday, rapper Megan Thee Stallion testified in the trial against Tory Lanez, who is accused of shooting her in the foot following an argument in July 2020. Megan, whose real name is Megan Pete, stated that she and Lanez had an intimate relationship that was not exclusive.

During the trial, the prosecutor asked Megan why she lied to the police about the shooting. Megan replied that she was afraid of the police and that, as a member of the black community, she doesn’t trust or cooperate with them. She also stated that her friend Kelsey Harris, who was also at the party, had a crush on Lanez and tried to create conflict between Megan and Lanez.

Megan testified that Lanez began the argument in the car by asking her why she was “snaking” her friend, revealing that Megan and Lanez had been seeing each other behind Harris’s back. She also stated that Lanez ordered her to “dance, bitch” before shooting at her as she tried to walk away from him.

According to Megan’s testimony, when she looked back after being shot, she did not see Harris at all, contradicting the prosecutor’s statement that Harris was near Lanez when the shooting occurred. Megan also stated that when she was shot and limped away, both Lanez and Harris approached her at the same time, contradicting the prosecutor’s statement that Harris checked on Megan after she was shot.

The trial continues as both sides present their evidence and witnesses. Lanez has maintained his innocence, and his defense team argues that Megan’s injury and lack of a clear view of the shooter mean she cannot accurately identify him as the one who fired the gun. Lanez arrived at court on Tuesday holding his young son’s hand and said, “This is my support system and I’m his too.”

Lanez has pleaded not guilty to charges of discharging a firearm with gross negligence, assault with a semiautomatic firearm, and carrying a loaded, unregistered firearm in a vehicle. If convicted on all counts, he could be sentenced to more than 22 years in prison and may be deported to his native Canada.

At 11:20 AM, Harris arrived at the courthouse holding hands with her spouse.

According to court reports, Lanez’s lawyer has made a surprising claim, alleging that it was actually Kelsey Nicole Harris who shot Megan Thee Stallion, not Lanez.

This claim has caused people to speculate about the truth of the situation, as Lanez had previously denied these accusations. A person on the street who was recording Harris’ arrival at the courthouse even called her out, saying, “Kelsey, big stepper, did you tell the court that you pulled the trigger? You had gunshot residue on you.”

Kelsey Nicole Harris testified that when she and Megan Thee Stallion returned to Kylie Jenner’s house, she stayed in the car while Megan went inside. According to Harris, something that Megan saw inside the house upset her so much that an intense argument erupted, leading to Kylie Jenner kicking Megan out of the house. Harris said that Megan ran out of Kylie’s house screaming, “B*tch, Kylie told us to get the f*ck out!” Lanez also left the house and joined Megan and Harris in the SUV. When Lanez got into the vehicle, he and Megan began to argue. Harris testified that Lanez revealed during the argument that Megan had been sleeping with him behind Harris’s back.

After Tory revealed that Megan had been sleeping with him behind Kelsey’s back, Megan turned to Kelsey and said, “Don’t listen to him, girl,” and then turned to Tory and asked, “Why would you tell her that?”

Harris’s testimony in the trial against Tory Lanez took an unexpected turn today when the prosecutor asked her about threats made on the ride home. Kelsey initially stated that she didn’t know if Tory had threatened to shoot her, but the prosecutor reminded her that she had confessed to this during questioning two months ago in September. Harris then invoked her Fifth Amendment rights.

The prosecutor pulled out Harris’s previous statements and asked her if she remembered telling them that Tory Lanez had threatened to shoot her on the ride home. Harris replied with “yes” and then asked the judge to speak to her lawyer. She was escorted outside to do so.

After returning to court, the prosecutor asked Harris again about the threats made by Tory. Harris asked the judge if she had to answer the question, and the judge told her that she did. Kelsey then invoked her Fifth Amendment rights again and the judge asked counsel to approach.

Harris’s counsel, along with the prosecutor and defense attorneys, spoke at the bench for about five minutes. The judge then paused court and sent everyone to recess to give Harris and her lawyer time to talk.

When Harris took the stand again, she admitted to lying to prosecutors about everything she told them in September and stated that she didn’t remember anything from that night.

Kelsey Nicole Harris denied shooting Megan and being in possession of a gun, but said that she did not witness Megan getting shot. She also stated that she did not see Megan bleeding and did not know who shot her or if she was even shot. Harris did admit to hearing gunshots.

In the last hour of court, the prosecutor asked Harris if Lanez had offered to pay for her lawyer. She responded “yes,” and was then asked if the rapper had actually paid for her lawyer. Harris responded that she didn’t know and couldn’t remember.

After Harris’s testimony, the prosecution reminded her that she had received immunity but could still be prosecuted for perjury if she lied under oath.

The prosecution then asked Harris why she had texted security guard Justin that Lanez had shot Megan if she didn’t actually witness the shooting. Harris responded that she was in a panic and didn’t know what she was saying at the time.

Harris also told the prosecutors that she did not know Megan was injured before going to the hospital to see her, stating that she was told Megan had stepped on glass.

Harris also testified that she met up with Lanez at a hotel after the shooting and that he apologized. When asked why Lanez would apologize if he did not shoot Megan, Harris stated that she never asked why he was apologizing.

The prosecution questioned Harris about a large amount of blood found in the SUV. She stated that she did not know about the blood and could not remember anyone bleeding.

They then tried to introduce Harris’s Instagram (IG) posts as evidence, but Lanez’s defense team objected, stating that they had not been provided with the posts. The judge adjourned the trial for the day to give the lawyers time to address the issue with the IG posts. The trial is set to continue tomorrow.

The ongoing trial and these new developments have sparked a heated debate about the events of that night and the credibility of the various parties involved. The public will have to wait for the verdict to learn the true story of what happened. The Best Hip-Hop Songs Of 2022 Curated By Dilemaradio

It's that time of year again when we at Dilemaradio take a look back at the past 12 months in hip-hop and highlight the top songs of the year. This year has been full of amazing music from a wide range of artists, and it wasn't easy to narrow it down to just a few, but after much debate, we have compiled a list of what we believe are the […]