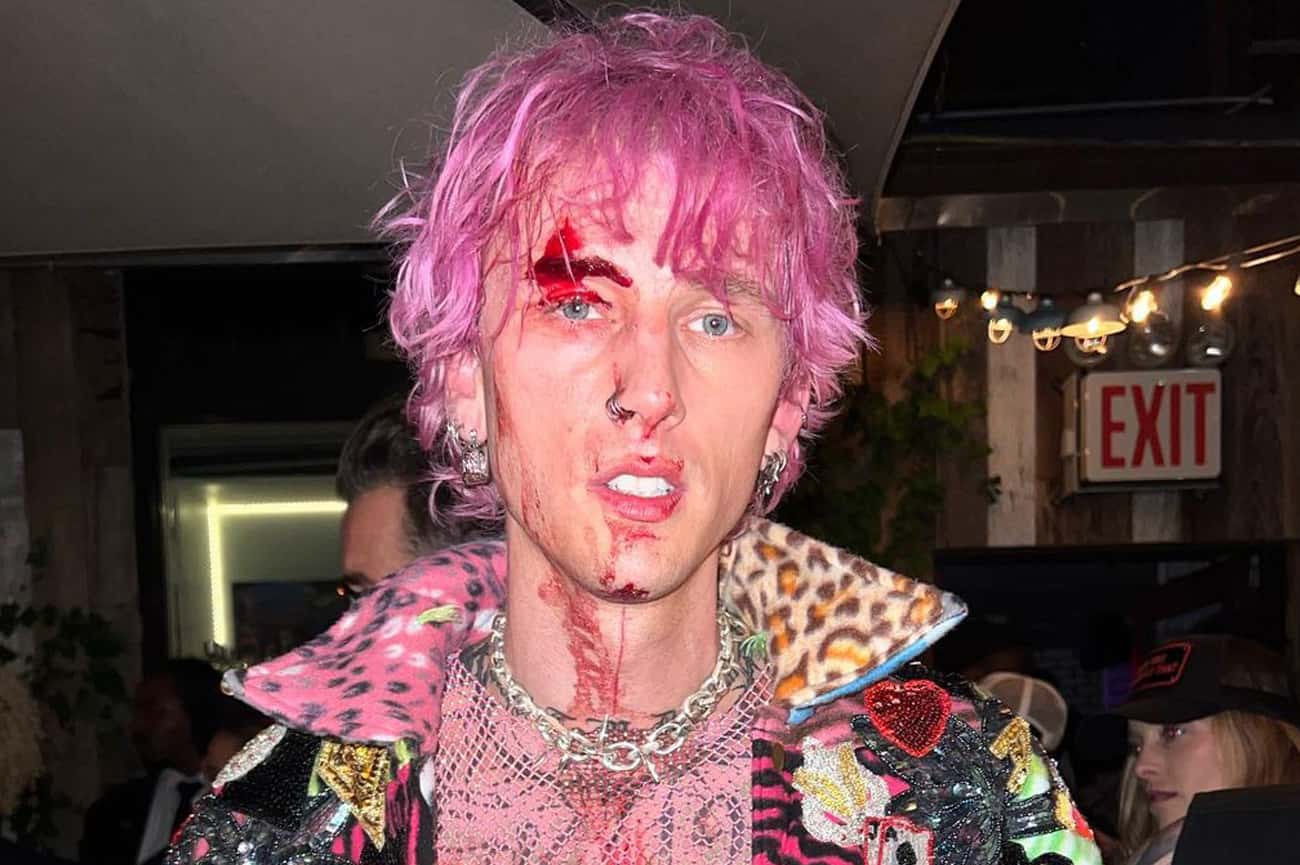 Machine Gun Kelly is a diverse artist who has been known to give some wild performances. But this Tuesday night, he took things to a whole new level.

On Wednesday morning MGK shared a video on Instagram Story of himself giving a speech at an afterparty in New York City, where he smashed a champagne glass on his forehead.

In the video, MGK can be seen holding up a microphone with one hand and smashing a champagne glass on his forehead with the other, saying: “I don’t give a f***.”

When the glass broke, it left him with a deep gash just above his right eyebrow that started bleeding immediately.

But MGK didn’t let it stop him—he started performing and kept going with the show while blood continued to flow down his face and onto his pink shirt!

Machine Gun Kelly has since posted pictures of the wound just above his right eyebrow as well as the bloody face on Instagram. He wrote: “NYC you’re my bloody valentine.”

The video and pictures have gone viral with people questioning whether or not something is wrong with Machine Gun Kelly.

It seems like he’s been on a downward spiral lately, and we’re not sure when it’ll end.

MGK Is Been Involved In Some Pretty Strange Behavior Lately

It’s not the first time the 32-years old artist has been involved in bizarre behavior.

Earlier that night in the middle of his sold-out Madison Square Garden concert, MGK lost his composure and stormed off stage toward a crew member.

The Bloody Valentine artist lost his composure and was seen yelling at the male employee.

The reason for his behavior is unknown and he was held back by security while band members continued playing music for the crowd while waiting for MGK to return to the stage. When MGK came back to the stage, he smashed a guitar into pieces before lying down on the ground.

It is unknown what exactly caused MGK to act out in such an aggressive manner. However, MGK has experienced other odd occurrences involving self-harm.

Machine Gun Kelly Is Opening Up About Taking His Own Life.

MGK is an artist who has seen his fair share of ups and downs.

Machine Gun Kelly’s new documentary “Life in Pink“, which premiered on Hulu, shows the rapper detailing a moment where he almost took his own life while on the phone with his fiancée, Megan Fox.

In MGK’s “Life in Pink”, documentary, he recalled that he felt paranoid after losing his father and falling into depression. He began seeing everything dark, even when it wasn’t there.

The controversial artist was so distraught that he put a shotgun in his mouth and contemplated pulling the trigger—and it was all happening while he was talking to Fox on the phone!

“I called Megan. I was like, ‘You aren’t here for me.’ I’m in my room and I’m, like, freaking out on her. Dude, I put the shotgun in my mouth. And I’m yelling on the phone and like the barrels in my mouth. And I go to cock the shotgun and the bullet, as it comes back up, the shell just get jammed. Megan’s like dead silent.”

It’s unclear whether or not MGK was under the influence of drugs during that particular time, but he said: “I was like, I need to kick the drugs for real this time.”

MGK also detailed how that moment helped him realize that he needed help with his depression and mental health issues so that he could be there for his family including Megan Fox and their 12-year-old daughter Casie.

It’s heartbreaking to hear about MGK suffering from depression and mental health issues—and it should make us all think twice about how we treat those around us who may be struggling with similar issues. Explains Why She Wanted To Cancel The Release Of Her New Song Cardi B is one of the biggest names in music right now. A lot of her success can be attributed to her social media presence and her ability to engage with her fans. Recently Cardi joined the fan-run "BardiGang" Twitter account to address the delay in the release of her new song, "Hot Shit," featuring Kanye West and […]