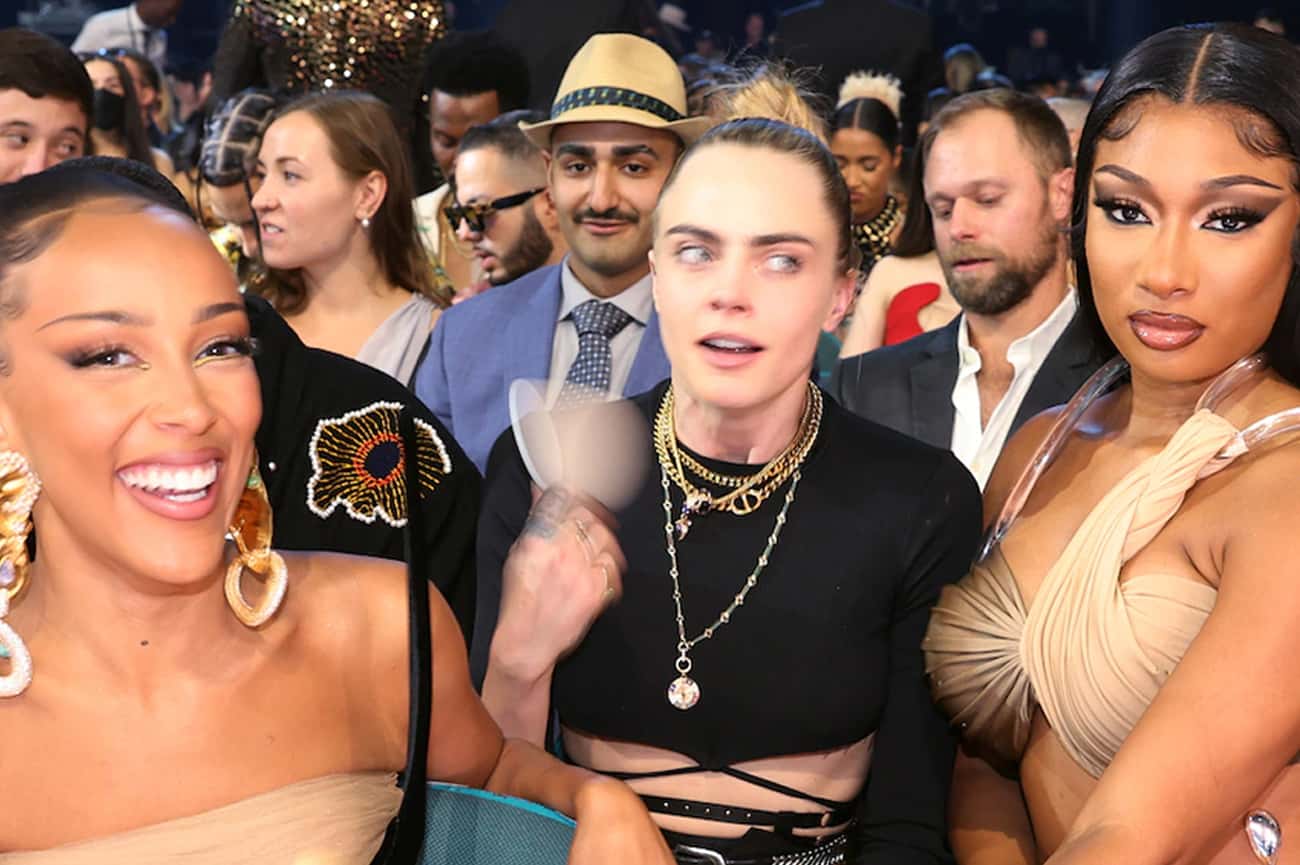 Megan Thee Stallion has uploaded a photo of her and Doja Cat posing together, with Cara Delevingne cut out, from a fan account.

Doja Cat was sitting in front of Megan and Cara in the original photograph, which was uploaded on photo database Getty Images.

During the carpet photo shoot Cara jumped into the shot and picked up Megan’s dress tail during her red carpet photo moment. Fans began to wonder what was going on with Cara “actin weird”,with many on social media assuming that she was high on drugs or intoxicated.

Megan handled the disturbance in calmly, but it’s obvious from her expression that she’s not pleased with Cara’s unexpected approach.

Megan appeared to affirm this when she uploaded the exact same photo that had Cara in it before she was edited out.

But did Megan really erased Cara from the picture, or was it someone else behind this?

Everyone on social media started to make their own assumptions.

One fan tweeted: “Megan cropping Cara Delevingne out of that photo with her and Doja is so funny for no reason.”

A video of Doja Cat and Megan conversing was shot as the surprising trio was sat together. Cara appears in the frame shortly after and praises Doja Cat.

Cara was seen in the video expressing how much she adores Megan in which Doja responded “I adore you too, I really like you two together.” In which Megan replied: “That’s my model bitch.”

The model expressed her joy for Megan as the news was revealed about her receiving the award for Top Rap Female Artist.

Delevingne stuck out her tongue and grabbed the tail of Meg’s dress as the star walked away to receive her prize.

The model raised further questions when she was shortly spotted rolling around on the floor to photograph Doja Cat, Fat Joe, and DJ Khaled together.

According to the publication, Megan or someone from her team manipulated the original photo to erase Cara. However, some assume that the photo was edited by a fan and that Meg just shared it without realizing that Delevinge had been erased.

The question on everyone’s mind: Who cropped Cara Delevingne out of the picture ?

The answer is… still unknown. But there’s a new suspect in the case, and it’s funny enough Diddy.

Diddy is known for his habit of taking pictures with celebrities and then cropping out the other celebs in the picture. He made headlines in the past when he cropped Kendall and Kylie Jenner out of a picture.

And now some people believe that Diddy is behind the cropping of Cara Delevingne.

In 2018, Diddy cropped Fabolous and cut out French Montana when he took a picture with Nas, Kendrick Lamar, and Jay-Z.

We may never know who cropped Cara Delevingne out of the photo with Megan and Coja. But we do know one thing: whoever did it is an absolute savage!

https://www.youtube.com/watch?v=tEK8bFRB9bc&t=18s&ab_channel=DilemaRadio The rapper recently traveled to Lagos for a music video with Nigerian superstar Davido. DaBaby's trip is trending on Twitter, and it appears that Nigerian fans are thrilled about the rapper's visit, surrounding him wherever he appears. DaBaby recently shared a few photos of his trip, which included exploring the city and visiting a Nike shoe store where he purchased a few sneakers. In the video, DaBaby rides in […]